Art as a Creative Endeavor : Caravaggio vs Rubens

Peter Paul Rubens painted the altarpiece for the same church, Santa Maria in Vallicella in Rome, that hired Caravaggio to produce the chapel painting "The Entombment of Christ." He must have seen Caravaggio's work and been impressed. Or he thought he could improve it.

Interesting how faithful Rubens copies parts of Caravaggio's work but he also dramatically changes the composition. The man at the left in red (John the Evangelist) is moved significantly in pose and in position although his hand remains positioned on Christ's wound. The head of Christ is changed, as is the head of Nicodemus, holding Christ's legs. The hair of both have changed. The Italian Caravaggio had given them black hair while the Flemish Rubens gave them lighter hair I would guess to make it more relatable to the local audience or more relatable to himself. The color of Nicodemus' clothes is also changed.

The stone slab is more unfinished and painterly in Rubens' version. Rubens omits the plant at lower left.

Rubens also omits the woman with her arms upraised (Mary of Cleophas) probably because when people look at Caravaggio's version they connect her with the stout man legs below her belonging to Nicodemus. Mary Magdalene with her hand to her head and her head down is modified only slightly. The older woman would be the Virgin Mary which Rubens changed radically and added another woman beside her. Personally I like Caravaggio's Virgin Mary and Mary Magdalene in parallel next to each other with their heads bowed down together like a visual stutter.

Rubens painted several variations of the subject, perhaps the subject for future post.

As a bonus, Caravaggio's entombment of Christ as drawn by Paul Cezanne


below the fold is an animated gif comparing them

Read more »
Posted by Col. Milquetoast at 9:23 PM No comments:

from the Washington Post is this 2013 article by Sarah Kliff titled "CHARTS: How Roe v. Wade changed abortion rights". The map from this article was previously mentioned here.


5. Abortion has become increasingly concentrated among low-income, minority women. Over the past four decades, the demographics of abortion have shifted significantly. In 1973, white women accounted for over three-quarters of all abortions. Now, that number hovers just below 60 percent. 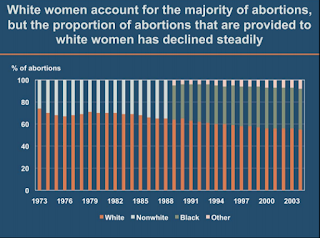 In 1973, white women had over 75% of abortions at a time when white women were an even larger segment of the population (87.7% of the population at the 1970 census). Although she says "Now, [article written in 2013] that number hovers just below 60 percent" for some unexplained reason her graph only goes up to 2004. The word "now" has to do a lot of work to cover nearly a decade. In the 2000 census whites were 75.1% and in the 2010 census whites were 72.4%. So the big news is that as national demographics changed so did the demographics of abortion. Quelle Surprise.

An even better comparison would be to breakdown the demographics by women of childbearing age or by pregnancies.


Her assertion about low income women getting a greater share of abortions is backed by a graph. That makes it odd that she would lead with and write more text about this weaker conclusion.


Posted by Col. Milquetoast at 8:58 PM No comments: