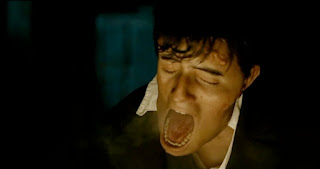 The Valdemar Legacy (2010) is Lovecraftian horror movie. It was pretty good. It had some tension and it maintained my interest.

Spanish language with subtitles and if you watch it with the Amazon Video subtitles turned on then it provides subtitles for the sound effects.

The character Jervás was played by Paul Naschy who I would swear I've seen in more than one movie but I can't figure out which.


The first movie in all Spanish's cinema history made without Spanish government subsidies.


That seems both impossible and yet somehow plausible.
Posted by Col. Milquetoast at 9:30 PM No comments:

The spiked german helmet is called a Pickelhaube and upon learning that as a kid I couldn't decide if the name was awesome or hilarious – I later learned it basically translates to "pointy hat" and not "pickle holder" as I had assumed.  This isn't to suggest that you couldn't stick a pickle on to the spike to save it for later.

An imperial double headed eagle as tall as the rest of the helmet is pretty magnificent. I suppose the spectacular hat is to make up for the fact that he is the cavalry drummer and in about a decade the Russian army would face a Japanese army armed with machine guns.

While the practicality of a giant feathered plume on your hat might be questioned by some. I wonder if its use waned because it would go embarrassingly flaccid in the rain?


The French WW1 helmet above has a decorative hump attached, although it was much less extravagant than the golden age. As the steel protective helmet took off the decorative features become less common.


The age of fantastic hats was also an age of proud facial hair. Although the fellow above may be making a statement with his lack symmetry.


Note his great squared and flat topped lancer helmet. Just imagine all things he could have balanced up there. People may not be surprised at a head on a pedestal but what about a pedestal on top a head? That's a man with a dangerous outlook on the world.
Posted by Col. Milquetoast at 10:31 AM No comments: