They're not egalitarians : Gender Gap Report 2015


Russia is still at the top of the list (page 62) when it comes to equality of life expectancy. That is to say that there is an enormous gender gap between men and women but since the gap favors women the authors count that as "equality"

Australia (page 90) is still a sexist, misogynistic hell-hole because the Healthy Life expectancy is 74 for women and 71 for men. Of course, the Gender Gap Report defines this as the 3 year gap suffered by men as a gap where women are behind as they only count it as "equality" if women live 6% longer than men or longer.

Note that the vertical dashed line indicates "equality." Since women do better than men they truncate the score at the "equality" benchmark because they don't want anyone to think men might fall behind (see page 5 of the report).  So, if you look at the 6th column of numbers you can see 1.06 is for sex ratio at birth and Healthy Life Expectancy is 1.14 but in the second column shows the truncated scores of 0.94 and 1.06 respectively.


They do 3 things with the data to generate the category score:
1) the convert to ratios to focus on differences between males and female scores

2) they truncate the data at their "equality" benchmark (ie with Healthy Life Expectancy they define equality as women living 6% longer than men; therefore with the Russian Life Expectancy Ratio at 1.20 they truncate the score to 1.06.) They don't want anyone to know if there is a gender gap where men suffer. "We find the one-sided scale more appropriate for our purposes, as it does not reward countries for having exceeded the parity benchmark."

3) the subcategory score is calculated with weighted average. A weight of 0.693 for sex ratio and 0.307 weight for HLE.  I think they calculated the weights (page 7) without allowing for their defining the more significant number as less than one and consequently even with perfect scores it'll always show women suffering inequality.


Update :  Interestingly, they have been producing reports every year for 10 years and have gotten media attention with every report but no one noticed that the weighting was wrong. One would think it would be a clue when a country has men suffering a gender gap in health subcategories that they report that as women suffering a gender gap in the category. How depressing that they put so much effort into collecting the report each year and after all these years I seem to be the only person to take a close look at it.

"The first is the sex ratio at birth, which aims specifically to capture the phenomenon of “missing women” prevalent in many countries with a strong son preference. Second, we use the gap between women’s and men’s healthy life expectancy."

The idea of "missing women," according to the abstract to the paper "Missing Women : Revisiting the Debate" referenced in the Gender Gap Report, is premised on "the number of females who had died as a result of unequal access to resources in parts of the developing world." Interesting that an "unequal access to resources" when it comes to men is seen as insignificant.

But I did notice that on page 11 they list the Health & Survival category and mark countries with a score of 0.980 as achieving parity (at least parity since the truncate the scores.) However, the chart they use to display each country's score in comparison to the sample average suggests that 1.0 is the standard of equality and Austria, for example is behind with regards to health. 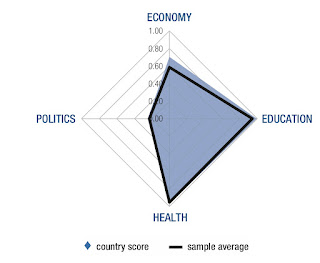 I would also note that if they used equal values (ie a score of 1 for equality in each subcategory) then the weighting would work.

Posted by Col. Milquetoast at 7:39 PM No comments: