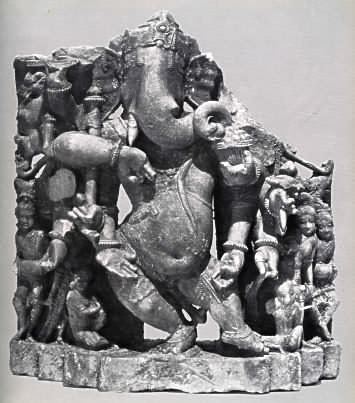 Although some of his arms have broken off, Dancing Ganesh (c.10-11th century) can still flash gang signs, hold an axe, wear an uncommon amount of jewelry (for a guy with an axe), and nibble on a giant cupcake/muffin. Surrounding Ganesh is several half-sized people.

Ganesh's forward facing eyes looks a little odd but better stereoscopic vision would be advantageous for someone with a bunch of arms and an articulated trunk.

And um... that's, uh, that's probably the end of his belt hanging down between his legs. Yeah, that's it. A belt.
Posted by Col. Milquetoast at 8:56 PM No comments: