There is a woman at work that I have never liked. She is too nice. I've been convinced from the first time I met her that it was fake. Most people seem to assume she is genuine.

The first time I met her she acted like we were best friends, spoke like she'd known me for years and she was "hands on"[1] She was like that with everyone. I guess some people liked the attention but i think that is like someone bragging that they slept with a hooker. If it is available to everyone then it is meaningless that you got it.

Also, a year or 2 ago she called, said "Hi, how are you?", I responded with "I'm miserable", to which she said "That's good, can I speak to Jim." I mean, if you are going to pretend you care and ask then you should at least pretend to care enough to listen to the response.

Today, I overheard a conversation outside of my door. Apparently someone quit, called her and wanted to personally come in and say goodbye because the quitter was fooled into thinking that M. cared. M. then went on about how she was glad the she was quitting, that it was difficult for her not to tell her that and basically mocked that the quitter for thinking that she felt otherwise.

No point to this other than to say that I like her a bit less than I did before and that, in this case, my gut instincts were right.

footnotes:
[1] by "hands on" I mean she touched people in ways she probably read in a book would be reassuring or familiar. I don't mean she was groping me or sliding her fingers up my thigh but due to my aforementioned irresistibleness I can't rule out that she wasn't thinking about it.
Posted by Col. Milquetoast at 2:52 AM 20 comments: Ash_ as a wee lass. (for some reason, she reminds me of Popeye) Col. Milquetoast. Just for the record, neither of my parents were Squiggy.
I assume I was not drunk when this picture was taken. wronwright?
Posted by Col. Milquetoast at 5:24 AM 10 comments: 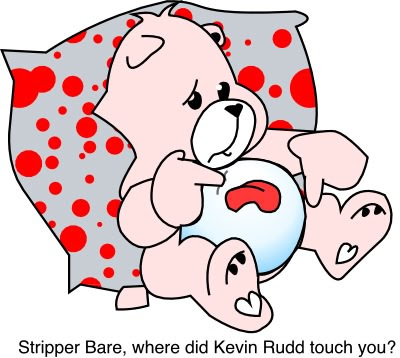