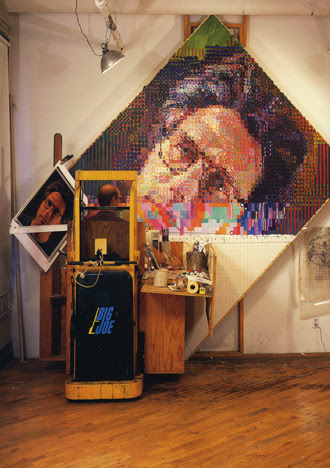 
Chuck Close at work. From Graphis Magazine #313 (no date printed but I think it is from around 1998) It is an interesting insight to how he works.  It looks like a two inch square grid at a 45º angle, he starts at the top blocking color in several rows, and then each grid tile is given a "dot."

At first it might appear to be that he fills in a band of the grid from the top down but compared to the finished piece and there were changes made in the corners. Aside from the background there is a little use of line that extends outside of an individual grid box. For example, part of his glasses and part of the shirt collar.

The lift he uses to raise himself to paint higher portions of the painting appears to be a Big Joe Lift In-Between Handling Manual Stacker IBH1018 or a very similar model.


Another photo in the article shows Close working in a different workspace where the painting can be lowered down into a hole in the floor. When he moved studios he retired his Big Joe lift and started moving the painting.

Below is the finished painting.

Read more »
Posted by Col. Milquetoast at 9:44 PM No comments: