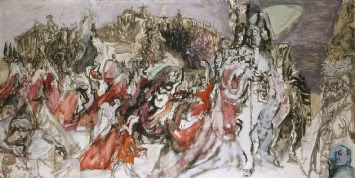 Above is part of The Coronation of Queen Elizabeth II by Feliks Topolski. c. 1960. I have yet to find someone who likes his work as much as I do. The Duke of Edinburgh commissioned it so he might.

I hear that the Queen of England is on Facebook. I assume she gets on facebook, looks up people from school and messages them asking :

"Remember me from algebra class? I was the girl who wore a crown everyday..."

"I was the girl who hit you with a scepter when you were flirting with the boy I had a crush on. I think it was a ruby that came off and had fastened itself to your forehead."

(I can't find the magazine to scan the image I wanted so this one will have to do.)
Posted by Col. Milquetoast at 12:30 AM No comments: