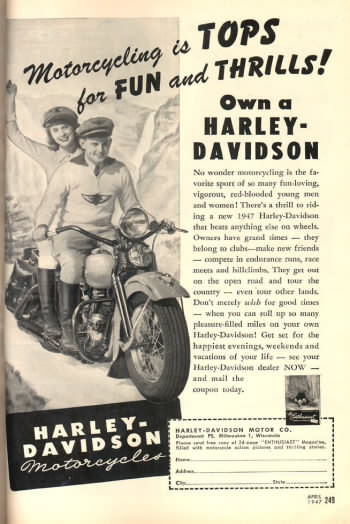 A Harley-Davidson motorcycle magazine ad from 1947. Apparently, in 1947 Harley's target demographic was creepy looking guys with dimples who lure unsuspecting young females onto his cycle to take a leisurely ride somewhere isolated where voices may carry but no one is around to hear.

Meanwhile, the young lady waves as if she is the Queen of England.
Posted by Col. Milquetoast at 4:08 PM 2 comments:

Email ThisBlogThis!Share to TwitterShare to FacebookShare to Pinterest
Labels: advertisement

Action In The North Atlantic 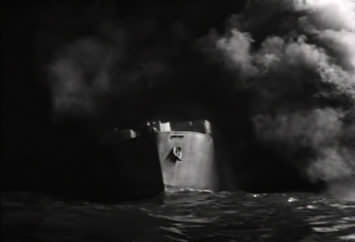 "Action In The North Atlantic" is a war movie made in 1943. I have yet to see the whole movie in a single sitting but It could be considered a war propaganda move except that it is a pretty good movie. Humphrey Bogart commands a Liberty Ship on his way to the Soviet Union during WW2.

•The germans in the U-boat spoke german! Not even subtitled! At first I thought it was done to dehumanize the germans, make them less easy to relate to, but then the Russians didn't speak english either (except for "Liberty Ship" which somehow they picked up)

•Bogie punches out a guy in a bar who was gossiping about ship movements. In some movies he would have been a Nazi paid informant sent by Hitler himself and the essence of evil. In this, he was just a drunk talking about what he saw. I suppose in the modern version George Clooney would whine about a conspiracy against free speech.

•It ends with Bogie lighting his own merchant ship on fire (Really! to lure the U-Boat to the surface) and then he rams his ship into the U-Boat. Once they get to the USSR everyone is happy but Bogie. He's thinking about "the trip back."

•The Nazi submariners die a horrible death and there is not even half a moment of grief about it. 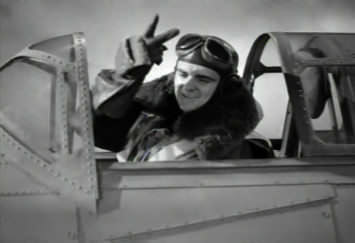 The Russian pilot sees the Liberty ship and pumps his arm while giving the peace sign. Almost.
Posted by Col. Milquetoast at 8:07 PM No comments: