Note to new parents (this means you, Ash) 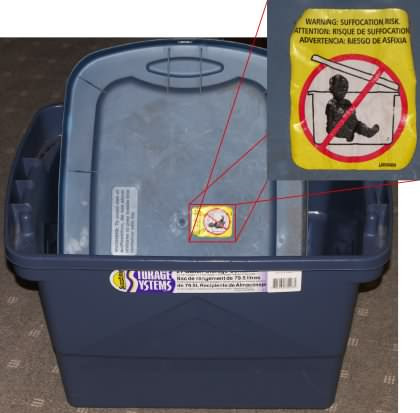 Do NOT store your child in a waterproof container! Even if it is raining! Make do with a tiny baby umbrella.

(as an aside, the kid in the illustration doesn't even fit in the container. Someone would have to force the lid closed)
Posted by Col. Milquetoast at 4:57 AM 6 comments:

A friend of mine for about 10 years is over the edge. She has always been a lefty. She used to be fun to argue with. I rarely convinced her to change positions but I think I showed her that there was logic and reasons why people disagreed with her it wasn't (just) because conservatives are evil. And she showed me that I'm a heartless bastard and I'm okay with that.

We drifted apart over the years. We see each other less and less. Also, she would say she'd call me back tomorrow and not actually call for 2 weeks. I don't like that. It has been about a year since I last heard from her. I sent her a Christmas card in January. I think it's over. I'm not sure I'm disappointed, the last time I was with her wasn't entirely fun :

1) she prefaced this by saying "you'd have to be a idiot not to realize this" : She claimed that in order to be middle class in the United States that you have to make at least $200,000 a year. I laughed out loud and asked if that was the median and where and how that figure came from. She had nothing to back it up, but she knows it is true. (btw, this isn't NYC. She lives in an older but nice house that cost less than 100K - I wonder what she would do with $200K/year)

(I think she got tired of saying "You'd have to be (enter pejorative here) to think (something she disagrees with)" only to have me volunteer that I might, in fact, be evil or stupid. She'd make a face of complete horror every time.)

2) she claimed that "Big Pharma" only steals research from the NIH and produces almost no useful drugs. They then sell non-useful drugs at unreasonablely high prices. The price needs to be lower so everyone can have access to these non-useful drugs. She also claimed that "Big Pharma", apparently since they have nothing else to do, creates diseases in order to sell a cure. I asked if she have any proof or evidence or even implication of this massive conspiracy involving thousands of people all over the world? I thought she'd back down. Basically, they are corporations, therefore evil, and therefore can be presumed guilty without any evidence at all.

3) she was really rude to the waitress when the kitchen screwed up her salad. Technically they screwed up her order 3 times but it was a gigantic salad and it wasn't like they accidently put an undercooked goat's head in it. Too many sprouts, aiiieeeeeee! And it wasn't the waitress's fault that the kitchen screwed up. She got huffy and declared that she knows one of the owners and that he'll be hearing about this. That she was a nice person was one of the things I liked about her.
Posted by Col. Milquetoast at 5:16 PM 13 comments:

For relief from aches and pains 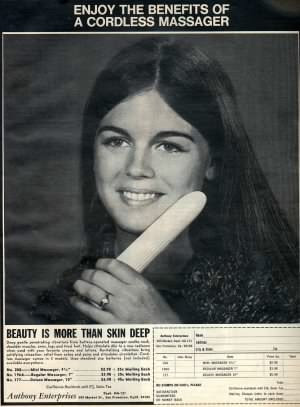 (aspiring model runs to her mother with magazine in hand)
"Mom! Mom! Look! Look, I'm a professional model!"
(mom's jaw drops)
(about a minute of awkward silence)
"Honey, do you... do you know what that is?"
"Sure, I do! It is a deep, penetrating cordless massager. It says right there on the page."
(aspiring model points to the magazine)
"Sweetie, do you know what that's...ummmm... used for?"
"Well, duh!! You can tell by the picture! When my jaw gets tired I can use that to relax it"
(mom faints)

By the way, it does say "satisfaction guaranteed or money back"
Posted by Col. Milquetoast at 3:49 AM 6 comments: