The lesson of this bad graph is don't just look at the graph but read the text.

from the Washington Post is this 2013 article by Sarah Kliff.


1. Before the Roe decision, most states did not allow legal abortion.

while the map does paint a certain picture by referring to "repeal" and "reform" of abortion laws. and the subhead says "most states did not allow legal abortion" the text walks that back considerably :


...Through the mid-1960s, 44 states outlawed abortion in nearly all situations that did not threaten the life or health of the mother. States began liberalizing their abortion laws in the 1960s and 1970s. This map shows the situation in the early-1970s, when Roe was decided.

The four maroon states legalized abortion in nearly all cases before the fetus was viable. The 14 pink states allowed abortions in some circumstances. Nearly all others continued to ban abortion in most cases.

This source lists the reformed group as : Colorado, North Carolina, California, Georgia, Maryland, Arkansas, New Mexico, Kansas, Oregon, Delaware, South Carolina, Virginia and Florida. I only count 13 which is also the count on the map.

The part I bolded hollows out the headline. So, the subhead should read "1. Before the Roe decision, most states DID allow legal abortion."  And the map should look different.

Note that unlike Kliff I include both a map showing an accurate representation of the subhead and also a map detailing what abortion laws actually looked like.


The son's sister : "He wasn't too happy the last years of his life, working for Reagan. He was pretty messed up about it."
Steve Coogan's character : "The Republicans withdrew funding for AIDS research because they blamed the epidemic on the gay lifestyle."

And yet the budget went up every single year throughout Reagan's term (table below from linked pdf). 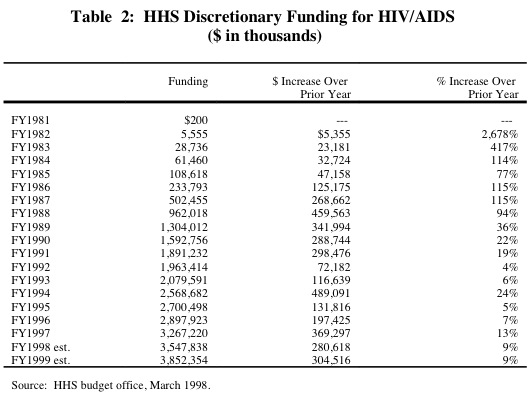 So throughout Reagan's term, the Republicans never were even close to a majority in the House and except for the very end where they became a minority they had a slight majority in the Senate but at no point had a filibuster proof majority.
Posted by Col. Milquetoast at 9:43 AM No comments: