@10:50
Robyn Thomas of the Legal Community Against Violence (aka LCAV) a group funded by the Joyce Foundation (which has given millions to gun control groups over the years) complains about Oleg Volk's posters in this video.


Robyn Thomas of the Legal Community Against Violence : What I'm noticing more and more is this really scary marketing techniques which implies that women have some sort of moral obligation to own guns to protect their families. So, someone sent me this website which shows some of this marketing, some of this propaganda type ads about this and the actual ad says "Around midnight, she called 911 but by 12:06 the fighting was done. No time to wait for help to arrive, so she used her rifle to stay alive."

Robyn Thomas of the Legal Community Against Violence : Obviously what they are telling us here is as a woman you can't rely on law enforcement to help you if an "intruder" (makes air quotes) comes to your house you have to have a gun available and ready to defend yourself.

Narrator : Based in San Francisco, Robyn Thomas heads a group of lawyers called the Legal Community Against Violence. She's angry about advertising campaigns that urge parents to buy guns for their children

Robyn Thomas of the Legal Community Against Violence : Here's one that says "Once mature enough to be home alone she's ready to have a gun of her own." To me this looks like a pretty young child (Oleg says the model was 16 at the time). The message is clear, parents should be buying a gun for their young child so they can defend themselves. How sort of ridiculous is it to think that a child is going to get this loaded weapon, is going to use it, be effective with it and what are you saying about the experience of that child in both instances.


Of course, Oleg isn't selling guns so it is dishonest to describe his work as marketing or ads. Few advertisements have no logos, no copyright notices, no mention of the product or no mention of the manufacturer. A gun controller lying to advance their position? I'm sure everyone is suitably flabbergasted. Oleg is a citizen using his First Amendment rights to promote his Second Amendment rights. They don't even show Oleg's web sites like a-human-right.com or olegvolk.net instead the show his images at a Canadian website in French that is critical of his work.

If she had been honest and had said the posters were not some expensive advertising campaign but images produced by some guy on the internet would the TV producers have included it in the program? 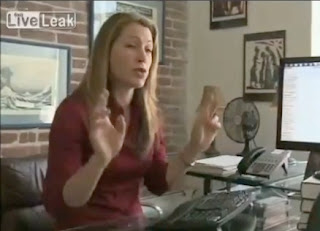 Did you notice at 11:25 she used both hands to make air quotes/scare quotes when she says intruder? One wonders if the Legal Community Against Violence is opposed to shooting intruders while being less concerned about any violence an intruder might commit.

A poster taped on a Prague wall in Czechoslovakia during the Warsaw Pact invasion of Czechoslovakia showing a tank with the Soviet star on the side driving over a marker labeled 4CCP/ЧССР (which is CSSR in Cyrillic aka the CzechoSlovak Socialist Republic) and a jug-eared, disembodied head of Vladimir Lenin weeping.

It sounds like someone drunk the Kool Aid if they thought that Lenin would cry over the Soviet Union invading another country. I doubt Lenin cried when he had the USSR invade Poland in 1919.

Lessons in propaganda techniques to be learned from this :

Posted by Col. Milquetoast at 8:42 PM No comments: