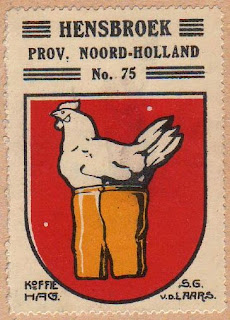 
Posted by Col. Milquetoast at 4:30 PM No comments:


All I did was innocently search wikipedia for the admittedly obscure Dutch painter Barend Dircksz and look at what wiki thought I meant. No thanks.


There is a tiny entry on the Dutch Wikipedia. For Barend Dircksz I mean.
Posted by Col. Milquetoast at 2:27 AM No comments:


Bahar Mustafa is a student union diversity officer at Goldsmiths University in the UK who was trying to organize a racially segregated event but asserts that she can't be racist or sexist because she is an ethnic minority woman.


According to reports at the time, Ms Mustafa posted a message on Facebook which read: "Hey, I made as many of you hosts so please invite loads of BME Women and non-binary people!!

"Also, if you've been invited and you're a man and/or white PLEASE DON’T COME just cos I invited a bunch of people and hope you will be responsible enough to respect this is a BME Women and non-binary event only."
Ms Mustafa added: "Don't worry lads we will give you and allies things to do", followed by  a winky face emoji.
In a video recently uploaded on local news website eastlondonlines.co.uk however, Ms Mustafa has described the backlash as "an outrageous distortion of fact".
In the seven-minute video, Ms Mustafa also refuted any accusation of racism and sexism', claiming "reverse racism and reverse sexism are not real".
In a presentation made in front of fellow students, Ms Mustafa said: "Furthermore, there have been charges made against me that I am racist and sexist to white men.

"I want to explain why this is false. I, an ethnic minority woman, cannot be racist or sexist towards white men, because racism and sexism describes structures of privilege based on race and gender.
"And therefore women of colour and minority genders cannot be racist or sexist because we do not stand to benefit from such a system.
"In order for our actions to be deemed racist or sexist, the current system would have to be one that enables only people of colour and women to benefit economically and socially on such a large scale and to the systematic exclusion of white people and men, who for the past 400 years would have to have been subjected to block colonisation.

"We do not live in such a system, we do not know of such a history, reverse racism and reverse sexism are not real."


First, this fails in reciprocity. Treat others how you want to be treated.

"Hey let's round up people based on their race and put them in a death camp!" should be considered racist who ever says it. Some people prefer chauvinism and think their racial hatred should be acceptable.

This definition enables racism against minorities.  "Hey, [ethnic slur], get in the back of the bus!" should be considered racist if uttered by an African to a Korean or vice versa. Her definition would mean that neither is racist.

If benefiting is the essential requirement of racism then wouldn't that mean a hotel owner who refuses to serve black customers is damaging his own business by turning away customers and is not benefiting from the discrimination.

It seems to me sadism is worse than someone benefiting. It is disturbing that treating another person badly isn't seen as poor behavior in and of itself.

I can't help but think of the similarity to the Curse of Ham being used as a justification of the slavery of the supposed descendants of Ham.

Some people aren't opposed to people suffering but just want to put the yoke of suffering around the neck of someone else.
Posted by Col. Milquetoast at 3:53 AM No comments:

The War on Metaphor

A tweet from Richard Horton (‏@richardhorton1) who is the editor in chief of the UK medical journal the Lancet and totalitarian crankypants :


Classic war on metaphor… Oops, did I say war? He is campaigning against … oops a campaign is a war metaphor too. He's targeting …ah, no.  He's going to the barricades to … nevermind.

He even recognizes and identifies it as a metaphor! Unlike some people who don't understand (or pretend not to understand) that a metaphor is not literal, he identifies that a figure of speech is being used but unfortunately that makes him sound like even more of a book burning totalitarian.

First metaphors are jailable, then similes, then allegories, then onomatopoeia and then, well, he'll just make up a reason after you're in jail.

Posted by Col. Milquetoast at 12:51 PM No comments: