To be fair, they may not be the stupidest cops in NYC; they might just be ignorant of the law and incompetent.

Ice T (sic) : What about the weapon Munch found on the roof? Any prints?
Cragen : No, but the serial number's intact.
Cragen : John, where are we with the gun trace?
Munch : on a cross country tour. It was lovingly manufactured in Sturgis, South Dakota, made it's way to a wholesale distributor in Brainerd, Minnesota who then shipped it to a whimsically named little shop called "Gun Ho!" on Staten Island.
Cragen : When?
Munch : Less than a month ago. Gun Ho! sold it last Thursday.
Cragen : We have a legal purchase?
Munch : Complete with loophole. It's a long gun so no background checks are required.

(In New York City, the buyer needs a license to own (pdf link) regardless whether it is a handgun or a long gun. You would think that someone at One Police Plaza would think to check if the applicant is a convicted felon (as the shooter was) before issuing approval and the buyer must register a rifle with the city. That is in addition to the National Instant Criminal Background Check System aka NICS. About the NICS : the Federal Firearm License holder contacts the FBI's "NICS Section via a toll-free telephone number or electronically on the Internet through the NICS E-Check System to request a background check with the descriptive information provided on the ATF Form 4473. NICS is customarily available 17 hours a day, seven days a week, including holidays (except for Christmas)."

It seems the SVU cops don't know either Federal law or NYC laws.)


Cragen : Cash sale?
Munch : Of course.
Cragen : Buyer's signature on the affidavit?
Munch : Yeah but it's illegible and I guarantee you it is bogus.
Cragen : Looks like "S. Brockwoll" or "Rockwell"
Stabler : first initial could be "G". Who made the sale?
Munch : The owner of Gun Ho! the name is… Brian Ackerman.
Cragen : Well he did a pretty half ass job. He didn't get a clear signature or a full first name.
Stabler : Let's go talk to Mr. Ackerman. 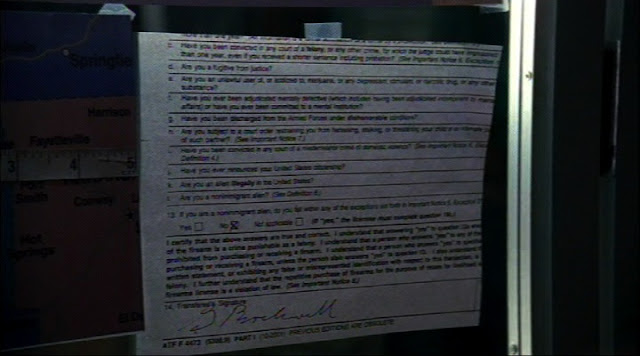 What else do the SVU cops not know about? Notice any difference in the Law & Order SVU's version of the ATF form 4473 (above) and the real ATF form 4473 (pdf) version shown below?


The investigation would have been so much quicker and easier if they had looked at the top half of the form that Munch didn't post on the board.  Specifically, box one (where the buyer prints his first and last name) and box two (the buyer's address) of the 4473.

Alternatively, they could have called the New York City License Division for the buyer's Rifle / Shotgun Permit (pdf) which includes not only the buyer's name and address but also :  the buyer's fingerprints and a full color photo of the buyer taken within 30 days of the license application. Shame on the NYPD in the Law & Order TV-land who approve gun licenses for convicted felons. Tsk, tsk.

Other things needed to get a license to own a gun in NYC :

Episodes like this, that lie about the state of gun control in the US, cause some to suspect the media of an anti-gun-rights bias.

Later, Law and Order SVU Detectives Stabler and Munch go to the gunshop, talk their way in, and at the end of the scene Munch tears an antisemitic pamphlet in two (at 1:55) and shoves a pile of paper to the floor (at 2:19).

I kept waiting for someone to say "Gee, Munch, just because you don't like someone or the despicable things they say doesn't mean you should use your position of power to destroy their property and be a dick by making a mess. Haven't you ever heard of do unto others as you would have them do unto you?" But, disappointingly,  the incident wasn't brought up once in the rest of the episode.

Posted by Col. Milquetoast at 3:37 AM