Doonsbury's Garry Trudeau's speech titled The Abuse of Satire was delivered on April 10 at the Long Island University's George Polk Awards ceremony, where he received the George Polk Career Award :

I, and most of my colleagues, have spent a lot of time discussing red lines since the tragedy in Paris. As you know, the Muhammad cartoon controversy began eight years ago in Denmark, as a protest against “self-censorship,” one editor’s call to arms against what she felt was a suffocating political correctness. The idea behind the original drawings was not to entertain or to enlighten or to challenge authority—her charge to the cartoonists was specifically to provoke, and in that they were exceedingly successful. Not only was one cartoonist gunned down, but riots erupted around the world, resulting in the deaths of scores. No one could say toward what positive social end, yet free speech absolutists were unchastened. Using judgment and common sense in expressing oneself were denounced as antithetical to freedom of speech.


Coming up with the euphemism "free speech absolutists" to criticize sounds much better than admitting that you want "restricted speech" over "free speech" because you fear the heckler's veto (or more pointedly the assassin's veto).

Imagine Garry Trudeau running a hot dog stand with a big sign that says "Free Hot Dogs!" But, he explains, he isn't a "Free Hot Dog Absolutist" so the hot dogs are $8 a piece.

Behold! he said to his father and his people, "What are these images, to which ye are (so assiduously) devoted?" They said, "We found our fathers worshipping them." He said, "Indeed ye have been in manifest error - ye and your fathers." sura 21, 52-54

The hadiths forbids the drawing people or animals : "All the painters who make pictures would be in the fire of Hell") Obeying the religious rules of everyone else's religions seems like hard work.

Although Trudeau says :
"one editor’s call to arms against what she felt was a suffocating political correctness. The idea behind the original drawings was not to entertain or to enlighten or to challenge authority—her charge to the cartoonists was specifically to provoke…"

That is not true.  The Jyllands-Posten cartoons were inspired by the fact that artists were afraid to illustrate a book by Kåre Bluitgen on Mohammed because they were afraid of violence. A group that successfully threatens others into following that groups religious rules instead of their own is not what I would call a  "powerless, disenfranchised minority" that should be immune from satire. One could even say it could "challenge authority."

"one editor’s call to arms against what she felt was a suffocating political correctness."

The Editor of Jyllands-Posten was Fleming Rose who is male.

"Not only was one cartoonist gunned down"


"No one could say toward what positive social end"

By punching downward, by attacking a powerless, disenfranchised minority with crude, vulgar drawings closer to graffiti than cartoons, Charlie wandered into the realm of hate speech, which in France is only illegal if it directly incites violence. Well, voila—the 7 million copies that were published following the killings did exactly that, triggering violent protests across the Muslim world, including one in Niger, in which ten people died. Meanwhile, the French government kept busy rounding up and arresting over 100 Muslims who had foolishly used their freedom of speech to express their support of the attacks.

Using his definition of inciting would mean that a Birmingham Baptist Church in 1963 getting bombed would have been incited by the church itself. 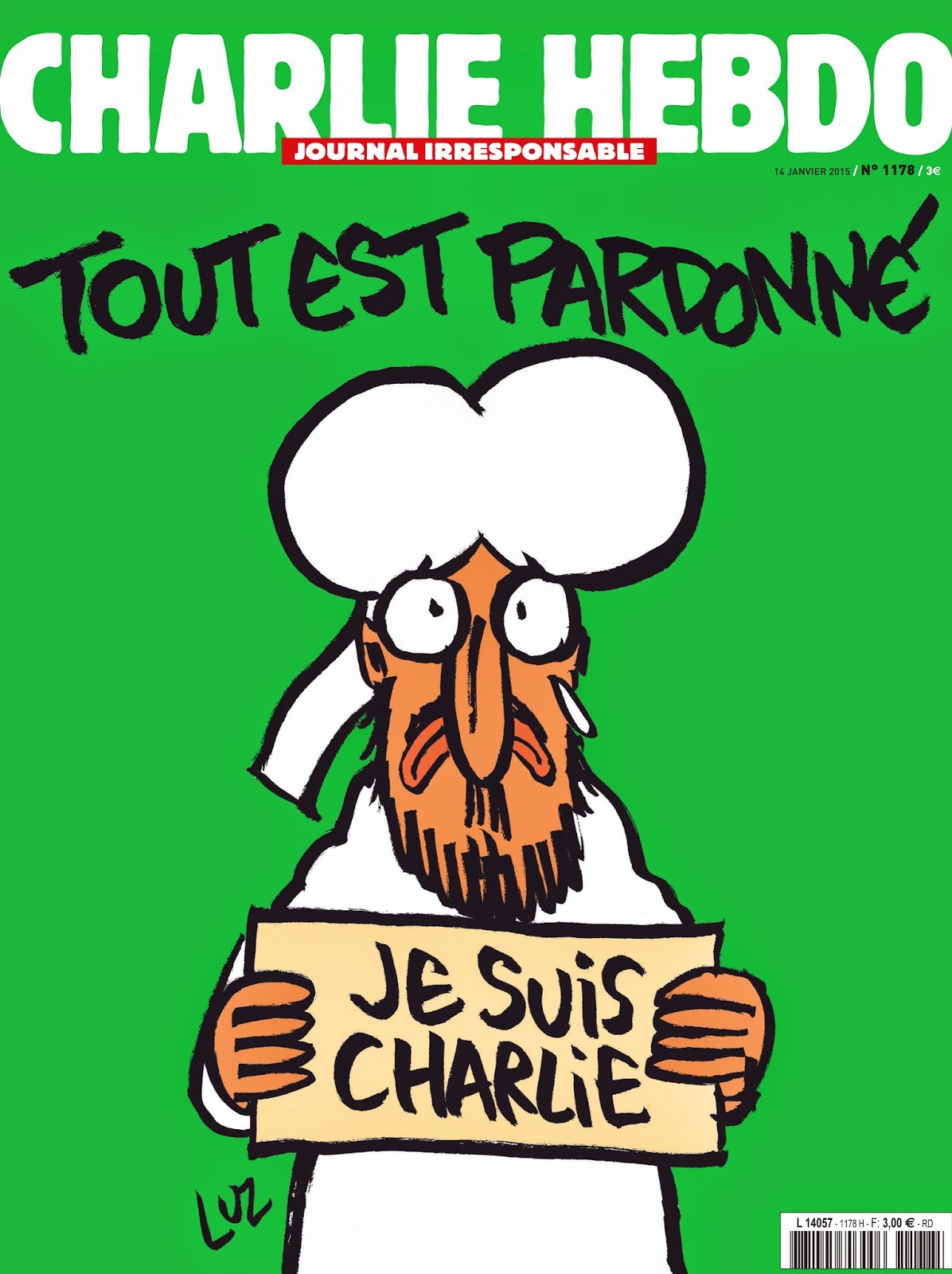 He doesn't specify what about this issue of Charlie Hebdo he mentions appears to be "hate speech", "punching downwards" or "attacking a powerless, disenfranchised minority with crude, vulgar drawings." The cover is following the religious customs of the magazine and not Islam because following the religious rules of everyone is difficult.

Update : a little more here
Posted by Col. Milquetoast at 12:48 AM