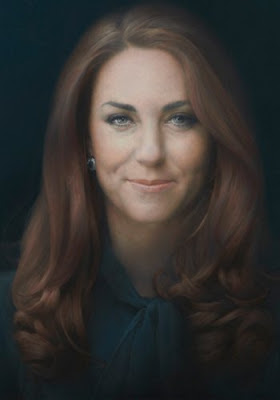 It isn't a painting but a photograph that has been printed using a labor intensive process involving paint.

It has that look of someone imitating a photo where they carefully transcribe each small detail they see in the photo but then the hair is given a different, less detail conscious treatment. It happens a lot.

The expression is also a photographic moment frozen in time. People don't see one another that way; we see the start point and end point of an expression and a blur and an approximation of what we think the transition expression is. Consequently, I think it looks less natural and I think most people can tell instinctively when it is based on a photograph.

As a photo, it isn't that bad (although it probably be better in black & white) but as a painting it lacks. It lacks charm and panache (In contrast, Feliks Topolski painted the British monarchy
with what some might call an overdose of panache). Maybe there is a painterly quality when someone stands in front of it but I have my doubts.

This guy refers to it as "[a] jowly face that will now be staring at us… Is that scratchy rug atop her head really meant to be Kate's famously silken locks? And what's going on with the mean, wierdly [sic] spaced eyes? And don't get me started on the nose." (Is a writer who refers to himself as "the Royalist" required to write like a Drama Queen?)

Posted by Col. Milquetoast at 9:02 PM