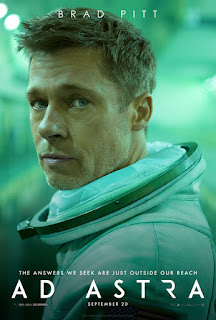 There was a lot of littering throughout the movie. Got a dead body? Toss it in space. An access panel? Litter it. They left crap all over the moon.

The was much more water just under Mars surface than anyone would have expected. The whole underwater scene seemed unnecessary as he could have had the Mars Administrator drive him to his destination or driven himself.

Why go to Mars at all? The government wants him to read a prewritten message to his father (a decrepit Tommy Lee Jones) but why not just record the message on Earth and then transmit it to Mars?

Donald Sutherland was wasted. Also, from previous movies I've been trained to expect him to present as a warm grandfatherly type and the later be revealed as pure evil. Shockingly that did not happen.

It is shocking that an experienced astronaut didn't realize that a spaceship could fly around the rings of Neptune.

Using a nuclear blast as a primary means of propulsion for a spaceship seems like it would have worked a little if only by shrapnel pushing the ship as it tears it into pieces. Does using the nuke suggests they ship didn't have enough fuel for a return trip?

Brad Pitt cries a single tear for his daddy issues. Unfortunately, I was distracted by the fact that he is orbit but the tear runs down his face.

The bureaucracy knows the surge is coming but are apparently stunningly incompetent. They consider Brad Pitt to be their best chance to stop future surges but they wait until after the surge occurs before contacting Brad Pitt despite knowing the surge is coming. They didn't try to protect him from the consequences of the surge. Then, knowing another surge will eventually come, they send him to the moon on a commercial spaceflight. Then he as to spend time in a quarantine. Then he has to travel from the lunar base to the launch site via moonbuggy across a dangerous no man's land which they consider to be in a state of war where they are attacked by moonbuggy pirates. It is almost like they didn't want to stop future surges.

While at the moon base he sneers at the lunar Applebees like an elderly teenager.

Things I liked :
I got the impression that the computerized Psychological Assessment was rigged to allow him to fly when they needed him but rejected him when it was convenient. That, like bureaucracy in real life it is a process that needs to be done but it is nonetheless meaningless. Perhaps, the assessment was simply a psychological tool to build confidence. Like the psychological assessment there were a few times where people said things that were pro forma statements, things people say in certain situations in an almost traditional way or ceremonial way.

Several scenes were excellent (the opening scene, the research vessel) but I disliked the movie more intensely than the nitpicks above might suggest. Show, don't tell is especially important for characterization (after all there are unreliable narrators). I watched the climax not understanding Tommy Lee Jones or caring about Jones or Pitt.
Posted by Col. Milquetoast at 3:14 PM

hello, thank you for this nice blogpost. Good criticism, even if more movies will make the same mistakes unfortunately. I hope you have a lovely day wherever in the Midwest you are