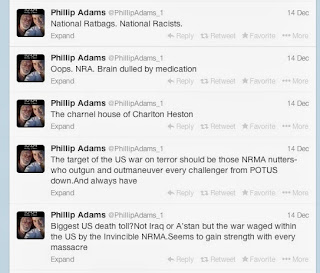 Phillip Adams is an old Australian lefty with a newspaper column, a radio show, and apparently a bit of a totalitarian streak.

The target of the US war on terror should be those NRMA nutters-who outgun and outmaneuver every challenger from POTUS down.And always have


NRMA is a typo for the NRA (National Rifle Association). (Or it isn't a typo and Adams has strong feelings about the National Roads and Motorists Association)

So, Phillip wants the US government to arrest and/or bomb people for engaging in free speech, questioning ideas, and peaceably petitioning the government. Who knew that merely advocating for one's explicit Constitutional rights would get you demonized as a terrorist.

Notice it isn't the people actually committing the murders that he wants to targeted but the NRA.  Keep quiet about my support for the Third Amendment or he might call for my hands to be cut off.

Presumably, if the NRA were less successful then Phillip might tolerate their free speech and might not want them dead. Maybe.

I'm sure all of those who fret over civility and campaign against eliminationist rhetoric will be up in arms and demand that he be denounced. Phillip Adams will be outraged when he hears what he's been saying. Here's Phillip Adams from Sept 10, 2011 :

It was widely accepted that her [Gabrielle Giffords] attempted assassination was triggered, no pun intended, by the verbal violence of US politics – such as the “lock ’n’ load” rhetoric of gun-totin’ Sarah Palin, whose campaign literature literally targeted political opponents, depicting them in the crosshairs of telescopic sights.


While sticks and stones break bones, words can never hurt? Manifestly untrue. Politics everywhere are holistic, interconnected, and the rhetoric of right or left can produce toxic atmospheres in which lunacy thrives.


It’s not enough for Abbott to tell us he “doesn’t entirely agree” with vile placards being waved at right-wing rallies. He must denounce them.


Today, words. Tomorrow, sticks and stones. And the day after that?

By the way, "It was widely accepted that her [Gabrielle Giffords] attempted assassination was triggered, no pun intended, by the verbal violence of US politics" was written a full 8 months after the shooting – that is, long after everyone but Phillip Adams realized Jared Loughner was motivated by being coo coo for cocoa puffs.

Update :  Here is some inflammatory demagoguery I've heard more than once.

To arms, citizens,
Form your battalions,
Let's march, let's march!
That impure blood
May water our furrows!
...
Tremble, tyrants and you traitors
The shame of all parties,
Tremble! Your parricidal schemes
Will finally receive their reward!


Not only does it call for violence it also refers to the "enemy" tyrants and traitors as having "impure blood" which is a creepy bit of racial demogoguery. We can only hope Phillip Adams will do something about it before it kills us all.

Update II : On reflection, if Adams considers the NRA to be terrorists then perhaps his opinion about terrorists should be explored.

In a column in the Australian July 12, 2005 titled "Britain had this coming" Adams explains :

And let's be clear about it: the people who died in the subway tunnels and on the bus were victims of the Iraq war. They died because of Blair's London Bridge, the one he built from the Thames to the Euphrates
.…
We say that what's happening in Baghdad and now London is inevitable, that the invasion has not liberated democratic forces but detonated more hatred, much of it directed against US hegemony and hubris.

Adams appears to think that terrorists lack an agency of their own and only react to outside stimulus.  I think this means Phillip wants to examine the NRA's root causes and conscientiously avoid doing anything that might provoke the NRA or its members into engaging in more of that free speech he finds so odious.


Update III : Phillip's twitter tirade includes "National Ratbags. National Racists. …The charnel house of Charlton Heston … those NRMA(sic) nutters" with all this incivility and "verbal violence" it raises the question : it seems Phillip is trying to provoke someone into murder, does he have a victim in mind? (assuming he believes his own writings)
Posted by Col. Milquetoast at 2:32 PM