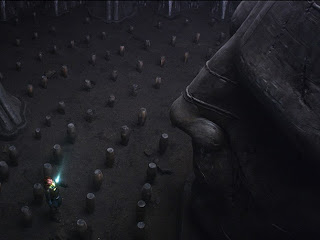 spoilers abound below the fold

"How do you know they created us?" "I just know… that the plot calls for me to say that."

The Titans record holograms (talky holofilms) of near random events… except for when they don't. Meanwhile, the crew have cameras running on their suits but when the 2 guys wander off and die no one says "Hey, we can't contact them let's see if we can get video from the suit and/or see what's been going on with them. And no one notices the beacon from the dead guy's suit walking back to the ship to attack? and attack because…

No one at all asks David what any of the Titan's text written on the walls says. wtf happened with the exploding head. It was sort of alive, they zapped it to encourage that, it started to… wake(?) and then kersplatter.

After the fight, why doesn’t Shaw use the stolen ship to return to – and warn – Earth?

I don't fault the character for being selfish and following her own interests. She did send out the warning message. She doesn't seem to have any family and the plot didn't call for her to have any friends. To be honest curiosity could probably make me do the same in her place.

Why were the Titans getting killed by, apparently aliens, and yet one survives only to be woken up and he automatically decides to smack some people around and then go depopulate earth? If that was what he wanted to do why didn't he do that instead of going into stasis?

seeding human life, then return to leave maps for humans to find them at some later date

or perhaps did they visit earth and stay? "Bow before me puny humans, you puny descendants of my vacationing comrades" How did they star map work? How much would gravity and expansion distort a map of star systems over 35,000 years. I note that Pioneer plaque used distance from pulsars and the pulsars frequency. btw, like the Titans, NASA also decided to only use a pictogram and have no written text instructions.

And are we supposed to endure a sequel before any of this is explained?

that would presume the writers have explanations.

Why does the ‘engineer’ have to sacrifice himself

I took it as a simple suicide. A suicide that released the black goo that then mutated and attacked the other Titans. (Charlie was infected by a speck, the translucent Titan drank a cupful.)

Could not Vickers at least try running perpendicular to the impending doom?

from Alien the Space Jockey with the hollowed out chest cavity was in the navigator's seat but in Prometheus he got out to chase Shaw (because the script says she needed chased some more) and the chest bursting occurred far away from the navigator's seat.

Absolutely the WORST way to implement a spacecraft lifeboat system. WTF. You have to get in a spacesuit to take an escape pod in order to get to the lifeboat?

If you come with a flute to start the engines up then you know it's a lemon.

Considering how few people have any musical talent, a flute could be a good method of locking up a gigantic spaceship to prevent joyriding. If a pilot loses his "keys" then he could start it up by whistling.

Prometheus vs Titan's ship. No collision avoidance system? For a ship that can come crashing to the ground from hundreds of feet up and land on its back and then fall forward and not be smashed to dust and gravel I'm surprised the much smaller Prometheus will knock it out of the sky? (I presume the answer could be some incredible energy source that enables interstellar travel.)

it raises big questions but offers no answers

If events simply doesn't make sense then they need to provide an answer or an explanation of how it is Mystery and not dumbness – especially for the small questions (eg the lifeboat system etc).

the whole film would be better off silent

amen. I went wanting to like it. I still want to like it. I'm hoping it can be edited into something that isn't as disappointing.

Update :
I think this is the original ending of Prometheus which shows the horror after the engineer arrives at Earth.
Posted by Col. Milquetoast at 2:47 PM