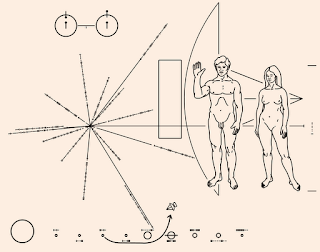 Since a simple star map would become distorted over time by gravity and expansion, the Pioneer plaque used distance from pulsars and the pulsars frequency to note its origin.

wiki notes that the arrow denoting the Pioneer spacecraft's origin received criticism because "arrows are an artifact of hunter-gatherer societies like those on Earth; finders with a different cultural heritage may find the arrow symbol meaningless"

Similarly , one could criticize the drawing of humans drawn in a simplified way that the vast majority of people can understand but may not translate to an alien that would have drawn in a topographic way or drawn heat or sees in another alien way.

But should aliens expect some other aliens' (Earthlings') spacecraft to not use their own language and their own symbols?

Morbo: Hmmm… judging by this the puny humans are nearly as tall as this spacecraft and the spacecraft is several times larger than their planet!
Kang : you have to admit that their planets are evenly spaced in a manner that is pleasing to the eye.
Morbo : The puny humans, don't realize that will only make it easier for Morbo's people to conquer their solar system!
Kang : It's a shame they haven't figured out a phonetic written language.
Morbo : Yes, for these puny humans to have spent so much effort to send a craft so far without asking how we are or describing how they taste is the height of rudeness!
Kang : Yes, yes, their message mostly seems to be about having us looking at them naked and they have drawn some disembodied boobs in the upper left...
Kang : I'm not sure if that is a frontal view or a top view or both.
Morbo : Puny humans only draw 2 bosoms! Pathetic!
Morbo : but these tasty circuits boards have all sorts of cryptic markings on them.
Kang : it must be a secret message. Perhaps it is a clue to a hidden treasure like in that Nicholas Cage movie.

Why not engrave a text explanation on the back or to the side? When dealing with aliens advanced enough for space travel, more information would be more useful. I think if we were to receive a message from aliens the more information received would be better.

(btw, I've always been annoyed at the fact that the 2 people are superimposed over the Pioneer craft – floating in front of it – instead of standing on the same plane as the spacecraft and standing in front of it.)
Posted by Col. Milquetoast at 4:51 PM