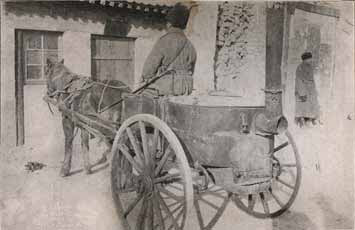 The rocket powered horse was developed by Paco Industries for the Russian Imperial Army circa 1904. The exhaust force from the vertical nozzle pushed the rear of the cart down and raised the horse off the ground to prevent injury at high speeds. Steering was accomplished through a handle next to the driver controlling a differential mechanism affecting the comparative speed of the wheels. Pulling back turned left and pushing the lever forward turned right. The rear exhaust nozzle's thrust enabled unprecedented speeds which any army could appreciate.

The main problem with the Rocket Horse was inattentive conscripts being told to pour the volatile rocket fuel into the opening at the rear. This lack of clarity did not lead to good results for either the horse nor the conscript. Other minor problems included its tendency to flip, its poor steering capabilities, its lack of passenger or driver restraints and its occasionally becoming unintentional airborne.

A Russian Soup Wagon
The Czar takes good care of his soldiers. A notable feature of the equipment of the Russians in the traveling field kitchen, consisting of a boiler mounted in a special wagon, so arranged that it keeps the army soup hot while being served.
Posted by Col. Milquetoast at 1:01 PM