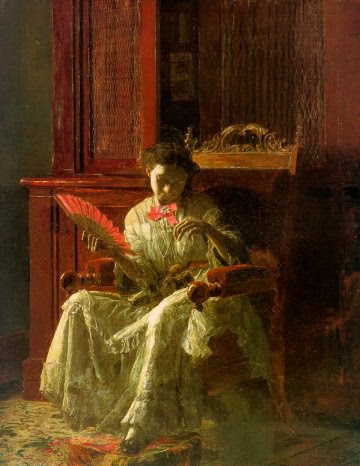 Kathrin Crowell was the sister of Thomas Eakins' school days friend and brother in law Will Crowell. In 1874 they were engaged but did not set a date. Some have speculated that Eakins wanted to establish himself before taking on the responsibility of marriage. However, apparently, progress was slow and she died in 1879. There is other speculation about their relationship but nothing definitive.

This was his first major portrait although it isn't thought to have ever been exhibited during his life. Notable is that it is a candid portrait. It isn't a stiff "someone sitting in a chair looking important while they get their portrait painted" sort of portrait. It is a brief moment of her life. She isn't looking at the viewer nor to the right or left. She is looking down with her face in shadows. My instincts say that her face is in shadows because he saw a technical challenge and wanted to show that he could.

Like many (maybe all) of Eakins' portraits he does not idealize or try to make pretty. I don't know how she felt about that. I suspect she would have wanted him to paint her as a beautiful, pink tinted angel. He studied in Paris under Jean-Leon Gerome, notable pinup artist of the 19th century, and likely had the ability but chose to paint a plain, rough reality.

Oh, why is this an explicit painting? Take another look at it. She is fanning her self while toying with a kitten in her lap. Or to put it another way : She is getting hot as she plays with her pussy (meow!). Yes, pussy really was a slang term used during the 1800s. I don't know if that was his intent or I have a dirty mind.
Posted by Col. Milquetoast at 6:23 PM

What a wonderful painting. I come back to leave a longer post here alittle later dear Colonel.

I can feel the solitude the woman feels as she plays with her pet cat. Her world is priveleged, her world is filled with riches, and yet, she looks lonely and bored with her life. The cat she craddles may be dear to her, but she looks as if she ponders her life and what it's about.

Her dress is rich in white lace, a sign of virgin female, her fan is rich red and she's waiting for passion. The shadows and light appear to kiss her in the places they should fall. The light is heavenly.

yet, she looks lonely and bored with her life.

You must be uncannily perceptive. A relative of Eakins said that Eakins' father felt it was unseemly that Eakins "associated" with so many girls and insisted that he get engaged and Kathrin happened to be the one. Rumor is that Eakins was really in love with her younger sister Elizabeth (who he also painted "Elizabeth Crowell and her dog" in the early 1870s but a much smaller painting) Elizabeth looks prettier, more outgoing and more impulsive. She seems to have tossed her jacket onto a sideboard and set herself down on the floor to play with the dog. She is also dressed in a red blouse. If white is for Kathrin's virginity is red for Elizabeth's passion? Also note the same chair Kathrin sat in is in the background of Elizabeth's painting and several other portraits. In another, larger painting, "Elizabeth at the Piano" she is dressed in black but with a red flower in her hair.

I can imagine me sitting there.

Colonel your included painting of Elizabeth and dog and piano etc... are beautiful.

I find it strange to see the virginity and the passion but it speaks to me, I guess it's the psyche calling deep seated symbols in all of us.

The chair is wonderful, it is stability, it could male.

The piano is spectacular, thank you for showing me. I'd love to see in real life.

Colonel, can I tell you, I'm not feeling really happy?

I've seen a few of his paintings in life and it is an entirely different experience than in a book. Life size pictures (ie snapshots of lives) are not very common these days and the scale surprises me.

The chair is wonderful, it is stability, it could male.