Elissa Strauss of CNN is an idiot

I'm embarrassed on CNN's behalf for this article they published (and I assume they paid money to publish). The article is basically the author reading web forum, quoting from it and then offering her own opinion. I would guess it is clickbait in the form of "Hey, look at this dumb pile of words! That can't be real can it? (click)" 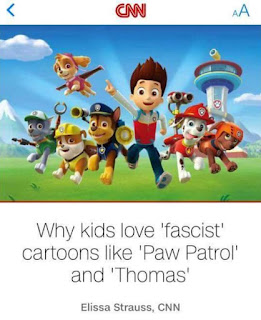 The article, filed under health for some reason as opposed to mindless wanking, is titled : "Why kids love 'fascist' cartoons like 'Paw Patrol' and 'Thomas'"


Among these cartoons' many critics exists a subgroup of parents who are OK with some degree of autocracy and Manichean dualistic politics but just wish they would be presented with more nuance.

By which the author means by almost nobody.


Here's an idea, gratis, for the creative team behind of "Paw Patrol" and "Thomas," should they want to broaden their appeal to parents without alienating their fan base: Ryder and Sir Topham Hatt retire and are replaced by their equally domineering sisters. This, in turn, boosts the social status of all the non-male characters. Children would still get the satisfaction of immersing themselves in an orderly universe where rules are rules, and everyone is in his or her place. Just without the white guy on top.

Just to be clear, Elissa Strauss is A-OK with what she describes as fascist if it isn't a white guy on top.

Posted by Col. Milquetoast at 2:29 PM

I read that article and thought the exact same thing. Idiot brainwashed snowflake.