Erasing the Past : Lynch schools 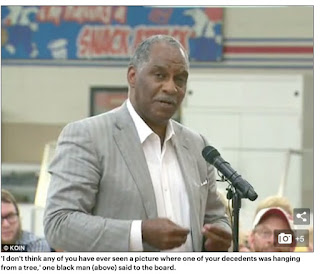 
In recent years, school officials say they have received complaints from people who are concerned about the name's connotation with lynching.'There were an increasing amount of questions and some complaints from families of color around the name,' Centennial School District Superintendent Paul Coakley, who is black, told the Oregonian.  'Our diversity is increasing every year, with families coming in from Northeast Portland and out of state, so [the names] needed to be looked at,' he added.


'I don't think any of you have ever seen a picture where one of your decedents was hanging from a tree,' one black man said to the board.

He probably hasn't either - at least I certainly hope not. Of course, being written by the semi-literates at Daily Mail I felt I had to check the other links to see if actually said either "decedents" or "descendants" or if he didn't misspeak and actually said "ancestors." He quite clearly says "descendants." What a travesty that no one recognized the mistake.

I do wonder if it a bit of rhetoric or if he actually has an ancestor who had been lynched. Of course, white people were lynched too.


A young student added: 'I know the majority of you guys are white and it's hard to know how that word could have an effect but it does. If a simple name change could make students feel safe, then why are we holding back?'

Remember, you have to be sensitive towards people. Unless they were born with the name "Lynch" in their family history in which case you can go ahead and smear them and their name with a brutal crime they had nothing to do with.
Posted by Col. Milquetoast at 11:21 PM

Email ThisBlogThis!Share to TwitterShare to FacebookShare to Pinterest
Labels: Erasing the Past