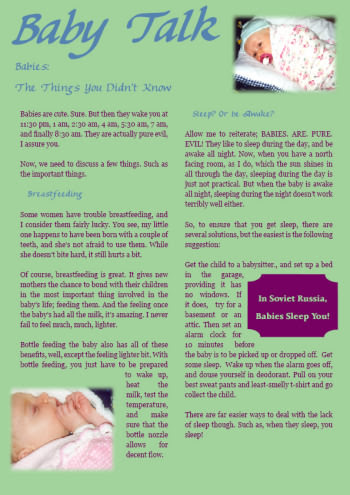 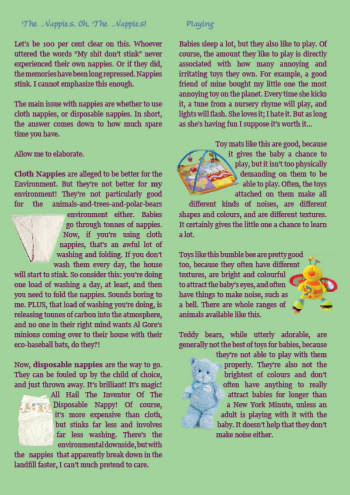 click to enlarge
Posted by Col. Milquetoast at 1:19 PM

On page one you mention the feeling you get after feeding the baby... FYI that wet feeling is when the kid spits up on you.

maybe your next Baby Talk can cover those mysterious times when a baby cries, one checks the basics(diaper, bottle and sleep) and none of that seems to be the issue and the baby is still too young to respond to one's repeated questions of "what's wrong" then one keeps checking the same things over and over and over again until the mother comes home and then the kid automagically stops crying.

He he he, Colonel, she rarely spits up, which is cool.

I'd address that problem Colonel, but I've never noticed it. I'll try though. Any other suggestions?

She's so adorable, I want to pick her up Ashy and buy her a present.

Ok, Colonel did you do the layout?

This section will be sooo kool...

Guys to let you know, I read colonel your blog I just got to a computer so I can post my messages.

Please excuse all the stupid jokes scattered throughout. I was pretty tired when I wrote it. I'm sure it's littered with spelling and grammer mistakes too.

I'd address that problem Colonel, but I've never noticed it.

that just furthers my conspiracy theory that mothers intentionally cover up some secret trick to get a baby to stop crying so that only mothers will know it.