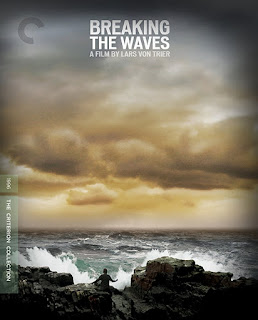 I saw Breaking the Waves (1996) in the theater. It is about a simple minded woman who might be crazy and thinks she talks to god. She marries an oil rig worker (I can't recall if there was a connection between the 2 or if it was just physical or if it was just convenient to the plot). She misses him while he is gone and prays for him to come back to her and then he is permanently paralyzed in an accident (a well done scene as I recall). Hopeless, he tells her to move on. Trying to convince her to move on he tells her to sleep with other men then he'll get better.

Between the trite plot, an ending that I predicted halfway through (but I thought it was too lame and hackneyed to make it into a movie), the so-called characters and the feeling that its 4 and a half hour running time could have been edited down to 30 minutes I felt absolute rage at this movie, for while having potential, turning out to be a waste of time. If I hadn't been the only person in the theater I would have tried to start a riot to tear down the screen and hang the director (Lars von Trier) in effigy.

I've never walked out of a movie but this is one that I wish I had.

I thought about rewatching it before writing this review but the intensity of my dislike for it remains. (I should also note that while I wrote above that it had a 4 and a half hour running time according to dvd.com its running time was only 2hrs 39min – it only felt twice as long.)
Posted by Col. Milquetoast at 3:17 PM