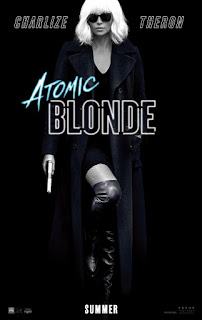 This gets the "She's a Ninja!" tag.  Mostly it was plausible but there were 2 occasions where she grabbed a fully grown professional spy goon and she flipped him aside like he didn't weigh twice as much as her. There were also the occasional choreographed fight scene when she fights multiple opponents where it seemed like everyone paused while she hits the first guy and then the first guy pauses while she hits the second guy etc... But that seems to be in most action movies these days.

It stars an aging Charlize Theron whose British accent didn't seem quite right. But my critical response to her performance could be due to her anti-charisma.  Her power of anti-charisma is probably equal to Matt Damon. Just like Matt Damon in the movie The Martian during the movie I hoped that Charlize Theron's character would get transported to another planet and run out of air. With both I am find myself distracted during their movies with the hope that their characters will die. It is potent anti-charisma indeed when I find myself hoping against hope that an East German Stasi goon will win the fight.

Unlike Matt Damon, I wonder if she is actually a robot. There was a moment, that due to the lighting, her pupil appeared to be square and my first thought was "I knew it she's an android!" (I thought for sure her character was an android in Prometheus). She isn't an unattractive woman but besides her appearance she generally seems like a complete bore and unconvincing.

At one point she takes a bath in a tub full of ice and then gets out, drops a couple ice cubes into a glass and pours herself a vodka. The ice cubes obviously came from the disgusting bath water.
Posted by Col. Milquetoast at 11:19 PM